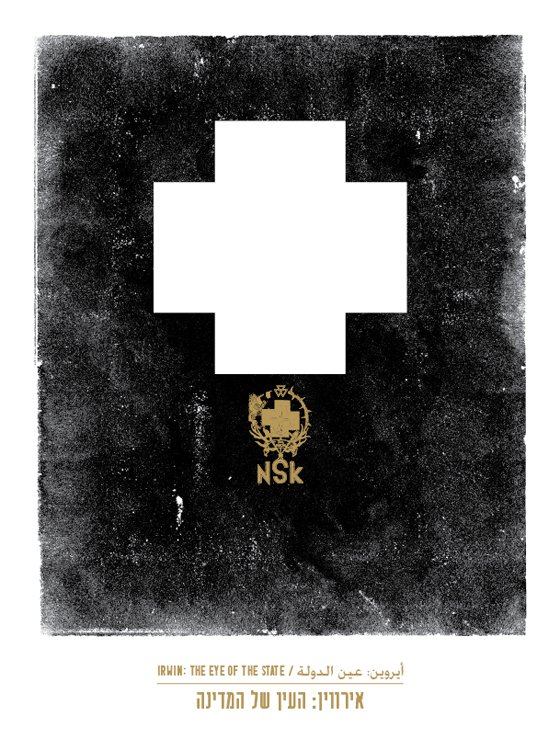 The Israeli Centre for Digital Art is proud to host the Middle-Eastern debut of the unique and influential art group Irwin from Slovenia.
Irwin serves as the visual arts department within the NSK (Neue Slowenische Kunst – New Slovenian Art) collective that also includes a music department (the band Laibach), a graphic design department, theatre department and a department for ‘pure and applied philosophy’.
Since its inception in 1984, NSK has become the most important disseminator of contemporary art in Eastern Europe in particular, and one of the driving forces of European art in general. The collective’s aesthetic and conceptual emphasis is the re-examination of the dramatic, heroic and tragic meeting point of the 20th Century’s utopian art movements and the totalitarian regimes of that century, and the way it resonates in Europe after the fall of the Berlin Wall, and hides behind values of contemporary capitalism.

The central characteristic of NSK’s art in general and Irwin’s in specific is the charged and provocative use of the aforementioned regimes’ aesthetics – they blend together socialist realism, fascist and Nazi neo-classicism, abstract suprematism and national, folk and ‘volkist’ elements. The five artists who comprise the Irwin group – Dušan Mandic, Miran Mohar, Andrej Savski, Roman Uranjek and Borut Vogelnik – have refused up until a few years ago to identify individually or sign their names on the artworks they created. The strategy behind this radical, confrontational attitude is what their compatriot thinker Slavoj Zizek termed ‘over-identification’. Instead of directly opposing the perils of totalitarianism, NSK and Irwin attempt to be ‘more righteous than The Pope’, more zealous in their impressive, seductive representation of the regime than the ways with which the same regime dares to present itself. This explicit, enthusiastic loyalty exposes more efficiently, according to Zizek, the dark elements contemporary state regimes attempt to conceal under a cool and pleasant façade. It goes without saying that in any of the cases where the state has prevented, censored or banned the activity of one of the NSK’s departments, the collective declared that this was the aim to begin with: testing the system’s validity and alertness, which proves, by the act of repression, that it defends itself well.

NSK started operating when Slovenia was still a part of Yugoslavia, and its use of fascistic elements disturbed the regime which maintained Tito’s legacy, since the victory over Nazism was indeed one of the founding myths of the entire Eastern bloc. In 1991 the collective declared itself to be a state in time, as opposed to space. This nebulous existence was nevertheless accompanied by the issuing of passports, stamps, currency, a flag and an anthem, and the establishments of temporary embassies operating alongside NSK exhibitions and events. NSK’s total identification with aesthetic signifiers of the state apparatus led to a dramatic blurring of art and life, when during the subsequent war an unknown number of citizens managed to escape from Sarajevo using NSK State’s fictional diplomatic passports. This same blurring rose to prominence again in recent years as NSK’s HQ were flooded with hundreds if not thousands of passport applications from African, mainly Nigerian, citizens, who hoped that NSK’s passports can grant them entrance to life in the European Union.

NSK have proven that their actions gain extra impact and validity on the background of dramatic change and upheaval. From the downfall of communism, through the war in the Balkans, and up to the new EU utopia. Therefore, the importance of exhibiting their work in Israel doesn’t merely revolve around providing the Israeli viewer with a chance to acquaint themselves with this fascinating body of work, but mainly around the collective’s activity as a model for artistic thought and praxis for us here and now. Israel, a state originating in a utopian concept which at birth sounded at least as imaginary and outlandishly refutable as the idea of the NSK State, is nowadays engaged in a struggle that borders civil war around the question of how to continue realising that original concept, when each camp claims monopoly over what Zionism is, convinced that the opposing camp will not only lead to the disappearance of Zionism as a unique utopian experiment, but to actual physical demise. At the same time, these camps face forces of critique that seek a paradigm to inherit and exchange Zionism, and all of the above can collectively feel the ground shaking underneath their feet due to the stamping might of the free market. Irwin’s work is throwing a gauntlet towards the Israeli art field that rarely investigates the meeting point of utopia-aesthetics-politics-state with an approach remotely resembling an overview. Contemporary art in Israel prefers either dissemination within the framework of the global market, or specific, issue-driven, critical political work – that is to say, both tendencies reveal a subscription to one of the many camps pulling each to its own direction, when no one demonstrates a desire or ability to inspect the big picture, the overall story, its roots, and accordingly, the vectors it may follow in the future.

To our dismay, the first gauntlet thrown by Irwin was not picked up. One of the projects presented in the exhibition is ‘NSK Guards’ – a series of photographic documentations depicting soldiers belonging to various (mainly East European) armies wearing armbands bearing the Malevich cross on their sleeves, and standing to attention in front of the NSK State flag. Irwin have formally invited the Israeli Defence Forces to participate in the project and be documented in the same manner, while performing military drills at the opening of the exhibition. The IDF flatly refused.
The exhibition will present a condensed retrospective of paintings and icons that are weaved through Irwin’s entire body of work, photographic and film documentation of NSK State activity in recent years with an emphasis on the operations revolving around embassies and passport issuing, and a new photographic project in which Irwin begin to touch upon the area of state and religion.

During the opening, the Israeli Centre for Digital Art will host an NSK embassy that will issue passports to interested parties, in return for a set fee and on the basis of a performance emulating formal procedure typical to any home office.

Curator Avi Pitchon first bumped into NSK in 1987, during a late-night screening of underground music videos presented by Yoav Kutner in the Tel-Aviv Museum, which included a live rendition of Laibach’s song ‘Die Liebe’. Pitchon holds, since 2003, a diplomatic NSK passport and in 2008 presented a commissioned edited sequence of Laibach’s documentaries and concerts in the exhibition ‘The White Sport’ he co-curated alongside Hannah Freund-Chertok.

Pitchon sees the presentation of Irwin in Israel a mission of goodwill and an integral part of fulfilling his formal duties to NSK State, abiding to the collective’s slogan ‘art is fanaticism which demands diplomacy’. 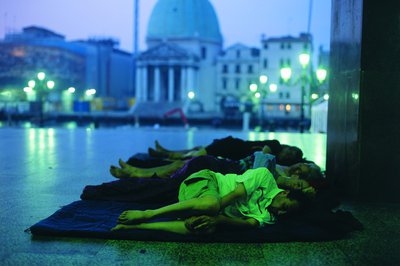 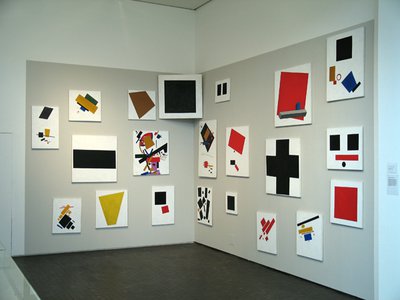 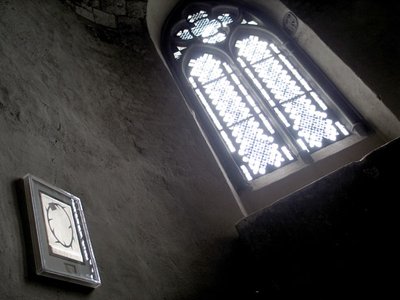