The NSK State Pavilion at the 57th Venice Biennale takes an unexpected and brave step, locating the NSK State in Time project in cultural-political context, taking responsibility for the resources IRWIN and other components of NSK have mobilised over the past years and giving response to some of the problematic aspects of the project. There has been a perpetual temptation on the part of some NSK State Citizens to imagine that this State in Time stands completely outside any geographical location. It is, after all, a State in Time as opposed to a State in Space. But this imaginary location of the State – and it must always necessarily be a location of some kind for it to exist – is symbolically anchored in a series of coordinates in which Western Nation States were born and through which Western States have offered themselves, sometimes imposed themselves as models for political organisation across the rest of the globe.

NSK State took shape first in Slovenia during the disintegration of the Socialist Federal Republic of Yugoslavia, harnessing modernist motifs – including the reflexively disruptive notion of the retro-avant-garde – to reconfigure national identity through a fiction, a series of fictions which borrowed from the imagery of statehood to disturb that imagery. How could it not, in that very deconstructive response to the symbolic forms of Western national statehood, borrow from those forms, using the stones from the master’s house and so bit-by-bit reconstructing the architecture of that house in its own image? The political project was the dissolution of the appeal of States in Space, but the conceptual-artistic project entailed, necessarily entailed, a replication of forms of Western modernity, its ideological texture which was named ‘Modernism’. NSK Citizens come from around the globe, yes, but in unequal balance and, whatever the fantasy of its Citizens, with unequal power. This much was clear from the entry into the State of the Nigerian Citizens who had bought passports in the hope that they might thereby gain access to Europe, to the West, even we might say, to taste the fruits of modernity.

IRWIN well know that no ‘metalanguage’ can be spoken, that is, that there is no pure neutral external vantage point from which we might speak about politics or Statecraft. We speak languages, always within them, inhabiting those languages, repeating their terms, implicated in them. We never speak a ‘metalanguage’ which escapes language as such. It is this sense of their being a location inside rather than outside language, the language of modernity, that IRWIN were taking responsibility for when they issued their Apology for Modernity. This is not the empty apology of the West – the standard hypocritical game of the Western States – but an apology with consequences, consequences which we must trace through together with those we make ourselves accountable to, to those who are routinely excluded from the Western version of the modern world. So, when IRWIN call for NSK Citizens to vote for this project, I vote yes.

Ian Parker is a British psychologist and psychoanalyst. He is Emeritus Professor of Management in the School of Business at the University of Leicester.

Ian Parker – author of Slavoj Zizek, a Critical Introduction was also a delegate of the First NSK Citizens' Congress 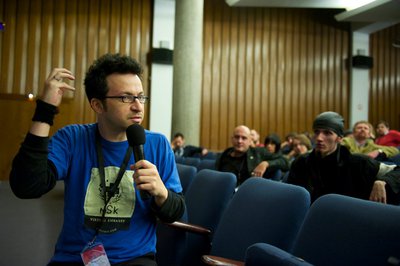