Galerija Gregor Podnar is pleased to announce Was ist Kunst Hugo Ball, an exhibition by the artist group Irwin in collaboration with Bishop Metodij Zlatanov, Metropolitan of the Christian-Orthodox Church in North Macedonia, in the Project Space of Galerija Gregor Podnar on Kolodvorska 6 in Ljubljana.

Was ist Kunst Hugo Ball will confront Greek-Orthodox icons with IRWIN-framed Dada works, complying with Dionysius’ invocation. This is the exhibition’s second presentation after it was conceived for and shown at the Cabaret Voltaire in Zürich in 2010. In Ljubljana Irwin will be showing the magazine Dada 4-5 of 1919, as well as the famous photograph of Hugo Ball as magical bishop dressed in a Cubist costume. Furthermore, there will be a large-scale photograph of Bishop Metodij Zlatanov, Christian-Orthodox Metropolitan of Macedonia, produced specifically for this exhibition and showing him holding in his hands an original Dada work from the Kunsthaus Zürich as if it was an icon in a procession.

Adrian Notz, co-producer of Was ist Kunst Hugo Ball and director of Cabaret Voltaire, describes icons as “ritualistic tools which do not represent holiness but are the substance itself, thus giving direct access to divinity. Their function as ritualistic tools brings icons very close to what Hugo Ball tried to achieve with Dada. Dada was neither a ‘style’ nor a ‘movement of art’, but a gesture Ball thought would help him obtain mystic insights. He conceived of this notion the night he was intoning phonetic poems in the guise and voice of a bishop. On 18 June 1921 Ball wrote in his diary Flucht aus der Zeit (1927): when I came across the word ‘Dada’ Dionysius called upon me twice. D.A. – D.A. He was not talking about Bacchus (Dionysus), but Dionysius Areopagita, a controversial mystic from the 5th century A.D. Ball had published a book about in 1923 entitled Byzantinisches Christentum.

IRWIN has dealt with the subject of icons in their series Was ist Kunst since 1984. In direct reference to the Last Futurist Exhibition 0,10, staged in St. Petersburg in 1915, IRWIN presents the pictures of their series in similar ‘Petersburg hanging’ fashion as the Suprematists did, Malevich’s Black Square hanging in the corner facing the entrance, the place where one would expect an icon to hang, thus turning it into an icon in its own right and becoming what this painting has been for years: the essential modern icon. IRWIN used Malevich’s Black Square, other Suprematist icons and other motives from the history of art and formulated them into a new whole. In 1995, when Was Ist Kunst was translated into icons, IRWIN selected a number of it’s own formulations out of the entire Was Ist Kunst body of works and started, following the tradition of icon painting, to copy them. Images from both series are connected by specific frames that are used to homogenize the diversity of aspects.

We would like to thank Ziva and Lazo Vujic from Visconti Fine Arts, Ljubljana, for their loan of Greek- Orthodox icons to the exhibition. We also would like to extend our thanks for their support especially to Adrian Notz, Cabaret Voltaire Zürich, Kunsthaus Zürich, and Geri Krischker.

During the exhibition, the gallery is open Tuesday–Friday, noon–6 p.m., and by appointment 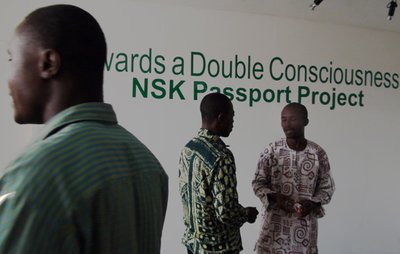 Centre for Contemporary Art, Lagos is pleased to host the internationally renowned artists collective IRWIN, members of NSK (New Slovenian Art). Over a one week period of screenings, lectures and panel discussions, Towards a Double Consciousness: NSK Passport Project will take as its point of departure, NSK’s artistic intervention State in Time and its increasing significance in Africa especially within the context of Nigeria.