Not everyone is aware of the fact that since its founding in 1980, Laibach has been creating visual art works, including posters, paintings, woodcuts, installations, videos, performances and artistic magazine projects. These works are referred to as Laibach Kunst.

Laibach Kunst is marked by a unique creative retro-avant-garde principle, created by a complex intertwining of a new image of neo-expressionism, post-conceptual practices, a punk do-it-yourself way of working and Heartfield collage. It is from this dangerous mixture that the specific Laibach visual expression has grown, based on the explosive appropriation of popular images belonging to various cultural contexts  often with conflicting ideologies, such as the cross, a cup of coffee, a metalworker, a deer, a drummer and others.

Posters have a special place in Laibach’s production. Their basic task, which is to attract the attention of the public in the cacophony of the urban environment, was completely mastered by Laibach and then upgraded so that the posters are not only mediators of information about an event, but are also a commentary on happenings in society. This double role was already present in Laibach’s three inaugural posters, with which they announced the 1980 event Alternative to Slovenian Culture in the Delavski dom Trbovlje (Trbovlje Laboure Hall), where they were to have their first exhibition and concert.

However, these posters were too much for Yugoslavia and had an explosive effect in the circumstances following the death of its longstanding leader, Josip Broz Tito. The black cross that sovereignly occupies the entire space of the poster, the industrial worker with a swinging hammer, and the two figures in combat, one of whom is raising a knife over the other, contained so many open-ended and ambiguous meanings that the posters had to be withdrawn and the event cancelled. A great deal was written about this in the media, who took issue with the government’s interference in artistic creation.

Over the years, the iconography from these first posters was upgraded and supplemented with new appropriations. It served as Laibach’s artistic communication code. The group took advantage of the recognisability of this code during the ban on the use of the name Laibach (the German name for Ljubljana) that was adopted by the Municipality of Ljubljana in order to prevent what it regarded as the socially harmful influence of the group. The image of the black cross alone was placed on posters advertising a concert at the Mladinski dom Malči Beličeve (Malči Belič Youth Care Center) in Ljubljana. Even though there was no name on the poster, everyone knew what the concert was. Thus the discriminatory ban was outmanoeuvred with the power of the image.

Over the forty years of the group’s existence, numerous posters have been created for Laibach’s concerts, theatre performances, films and exhibitions. The selection of posters for the exhibition at the Ljubljana Castle is made in such a way as to draw attention to some basic characteristics of the group’s operation. It speaks of their forty years of existence, their diverse international work and their multimedia creations. It also shows the development and variations of the individual artistic codes of Laibach’s iconography and the range of design from the initial do-it-yourself production, which consciously acted in a rough and uncultivated way, to the later refined professional execution, which still questions established social norms and produces paradoxical social effects. This is the main power of Laibach’s art.

Curator of the exhibition: Lilijana Stepančič
For visiting the event we recommend the funicular railway. 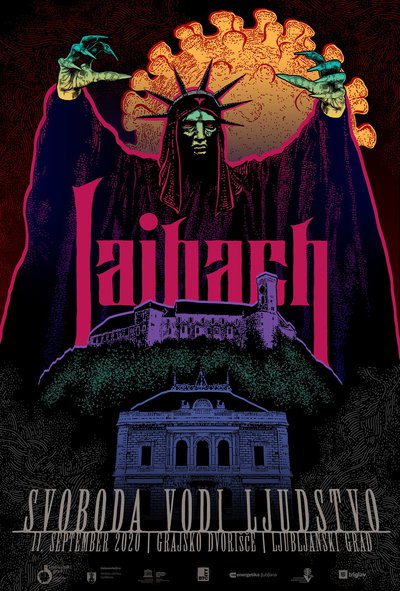 Laibach concerts at the Ljubljana Castle

Two SOLD OUT concerts by Laibach are planned as the opening event of the Dragon’s Fest, a traditional, diverse three-day event held on the Castle Hill in Ljubljana.