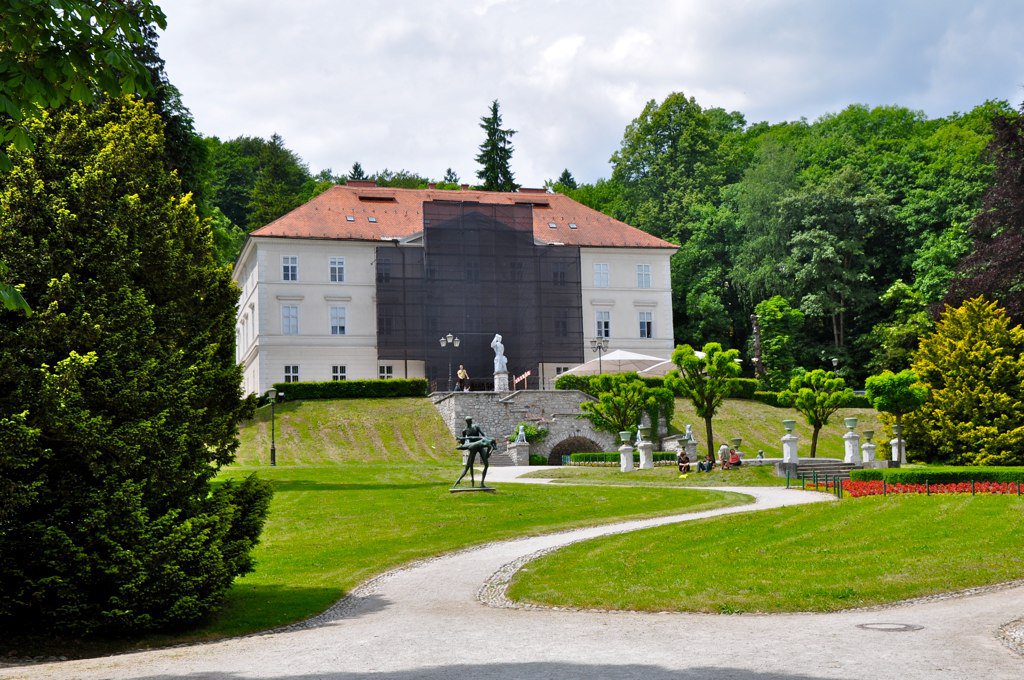 Thirty years have passed since the founding of Laibach, a group whose music and performances have become part of cultural history. What many do not know, however, is that Laibach in fact began its career as a visual art group. Images that most of us know from the paintings of the Irwin group – the cross, the coffee cup, the deer, the metal worker – were originally Laibach motifs. They were part of the capital the group invested in the newly established collective Neue Slowenische Kunst in 1984. With the founding of NSK, the visual art tradition Laibach had been creating up to that time was taken over by Irwin.

Laibach brought an alternative post-modern form of creativity into Slovene art. The group drew connections between New Image painting, the do-it-yourself art of punk bands and the post-conceptual practices that were being promoted in the Belgrade and Zagreb art scenes. Laibach “welded together” various media – music, video, film and performance – “high” and “low” culture, pop culture, politics and art. And at the very start of the 1980s, they defined in clear terms the fundamentals of the Retro-Avant-Garde.

Laibach’s first realized exhibition (not including the one in Trbovlje in 1980, which was so controversial it was banned before it ever opened) took place in June 1981 at the Srećna galerija of the Student Cultural Centre in Belgrade. Some of the group’s members had been doing their army service in Belgrade and, in their spare time, had developed contacts with the alternative and New Wave scene that met at the student centre. Titled Ausstellung Laibach Kunst, the exhibition presented some of the group’s early prints and paintings as Laibach’s music buzzed alongside them from a cassette recorder.

The artworks represented a response to the contemporary art scene outside of Yugoslavia, especially the Neue Wilde artists in West Germany, who in the late 1970s depicted such urban phenomena as the punk scene and addressed certain suppressed topics from recent German history, specifically, from the Nazi and post-war periods. Punk and the reinterrogation of Nazism and other totalitarian ideologies was also an integral part of the subculture scene in Ljubljana.

This first show in Belgrade was followed by the extraordinary ambient exhibition Plane Crash Victims, in December 1981 at the newly formed Disco FV in the Rožna Dolina Student Village in Ljubljana; Laibach then went on to have fairly regular exhibitions at Galerija ŠKUC in Ljubljana, Galerija PM in Zagreb and the Student Cultural Centre in Belgrade. With the founding of NSK in 1984, Laibach redirected their energies into music, while the art tradition they had created was in large part taken over by the Irwin painters. With the disintegration of Neue Slowenische Kunst, which in the early nineties gradually reshaped itself as a utopian “state in time” (without its own territory), each of the member-groups continued to develop their own aesthetics and Laibach again started appearing from time to time in a gallery context. Thus, in 2009, at the Muzeum Sztuki in Łódź, Poland, Laibach had its first retrospective exhibition, which was very well received by the Polish media. Three large gallery presentations are planned for this year: in Ljubljana (at the International Centre of Graphic Arts), Trbovlje (at the Workers’ Hall) and Zagreb (at the Croatian Association of Artists).

The exhibition at the International Centre of Graphic Arts presents a survey of Laibach’s art in the first decade of their career, when they played a central role in the art of the 1980s subculture movement. The show presents Laibach as a multi-media group combining art, music and theoretical writings, with the transfer of theoretical thinking from Laibach to NSK shown using the example of visual culture. The exhibition is itself historic, for here paintings, prints, posters, publications, newspaper pages, invitations, record covers, photographs, concert stage sets, videos and promotional products are assembled and displayed for the first time in 30 years. Also on view are three new installations made especially for the International Centre of Graphic Arts exhibition. The exhibition is curated by Lilijana Stepančič.

The exhibited works come from the archives of Laibach, Barbara Borčić, Škuc Forum, Radio-Television Slovenia and the photographers Boris Cvetanović, Dragan Papić, Jane Štravs, Nikolaj Pečenko, Antonijo Živković and Siniša Lopojda, as well as from the collections of the International Centre of Graphic Arts, Neil Rector and Daniel Miller and the photography collection of the National Museum of Contemporary History.

The exhibition is on view at the International Centre of Graphic Arts, Tivoli Mansion, Pod turnom 3, Ljubljana, from 16 April to 6 June 2010, from Wednesday to Sunday, 11 a.m. to 6 p.m.

Prints and posters are among the basic forms of expression for the group Laibach. Even at their earliest exhibitions, between 1980 and 1984, graphic art represented a core part of the group’s repertoire. Laibach still returns to printmaking on occasion, and now they are presenting their most recent graphic work an accompanying programme to the exhibition Gesamtkunst Laibach, Fundamentals 1980–1990. With never-ending artistic freshness, Laibach creates a path for reading images that will also appeal to the new generation born after 1980.

A concert by Laibach, featuring music from the group’s first decade, is being planned in conjunction with the exhibition GESAMTKUNST LAIBACH; the details of the performance will be announced at a later date.

Laibach’s achievements place them among the world’s most acclaimed groups. Here we will mention only the fact that the British curator Catherine Wood, writing in the American art magazine Artforum in December, chose Laibach’s project The Art of the Fugue (LAIBACHKUNSTDERFUGE, Dallas Records, 2007), which the group presented at a live concert in London, as one of the top ten events of 2009.