Established in 2015, the NSK State Reserve manages the currency supply for the virtual state established by art collective Neue Slowenische Kunst (NSK). While the individual notes are intriguing artifacts of the state, the broader purpose of the agency is to create a circulating medium which connects citizens of this state. To date, The NSK State Reserve has created and distributed thousands of these notes. In the tradition of occupying powers, these notes are created through a process of overprinting and hand stamping on a substrate of already existing currency, creating a parasitic relationship with the original issuer. Often the currency’s host is a “dead” currency, either retired from circulation or issued by a state which no longer exists. Hence the motto of the NSK State Reserve: New Life for Old Money.

This exhibition includes currency, bonds, and other works related to the NSK State Reserve, including collaborations with NSK State citizen Valnoir Montesange.

Charles Lewis is an active citizen and diplomat of the NSK State, a virtual state founded by the Slovenian art collective, Neue Slowenische Kunst. He has participated in many NSK State events including the Citizens’ Congress, Folk Art Biennales, and the NSK State Pavilion at the Venice Biennale. He has lectured on NSK-related topics at various institutions and events including Hauser-Wirth gallery, Stony Brook University New York, The Morbid Anatomy Museum, and MoMA, and is a principal of the NSK State Reserve. In addition to his work with the Reserve, Charles is currently writing a horror novel he describes as “Cormac McCarthy meets Love and Rockets.”

david K. Thompson is a native New Mexican multi-disciplinary artist. His art juxtaposes found-object readymades, machinery, propaganda, documents and other forms of æstheticised nationalism culminating in mechanized absurdity and delineated psychological geographies. Through the deliberate misuse of scientific or religious aesthetics, cartography, and political semiotics, his work questions taxonomy, the existential nature of identity, and even the notion of art itself.

As a NSK State diplomatic passport-holder, david K has labored in the service of NSK State diplomacy, designing bureaucratic implements for many State functions including the NSK Passport Office, MoMA, New York and NSK Electronic Consulate New York, at e-flux. From 2015 he has functioned as a principal in the NSK State Reserve, collaborating with NSK artist group IRWIN to provide liquidity for the NSK State Pavilion at the 2017 Venice Biennale.

This exhibition will run until mid Febuary 2020!

This speech was given as part of the inauguration event for Print Studio, an interactive space at MoMA to explore the evolution of artistic practices relating to the medium of print. The event featured an NSK Passport Office, and additional presentations from Miran Mohar, Conor McGrady, and Gediminas Gasparavicius. 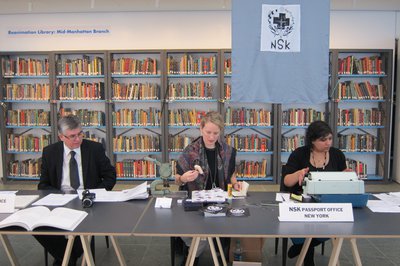