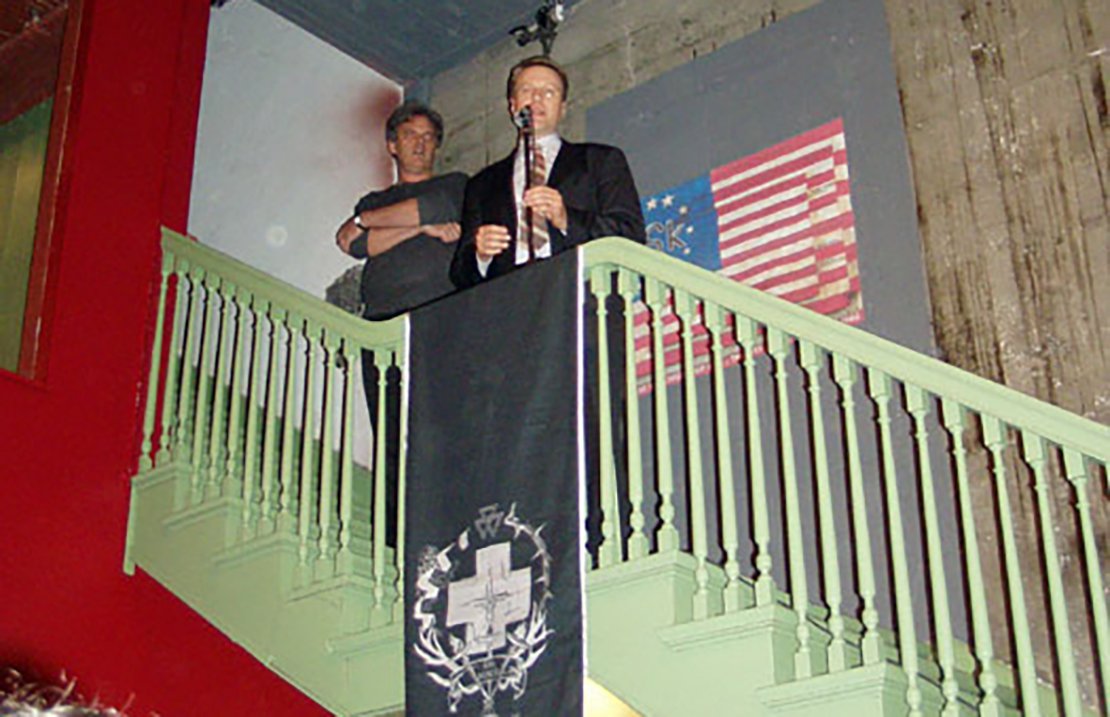 With its seductive architecture, stunning landscape and rich cultural history, Slovenia's capital city of Ljubljana is fast replacing Paris and Prague as a destination for adventurous travelers. The first of the former Yugoslav republics to declare independence from the Yugoslavian Federation, Slovenia largely avoided the ravages of the Balkans conflict, setting the stage for a remarkable cultural renaissance. In recognition of this region's unbridled creativity, Northwest Film Forum and Scala House Press are pleased to present "State of Art: The New Slovene Avant Garde." This project will feature the best of a new breed of contemporary Slovenian filmmakers, writers, artists, and musicians.

This weeklong festival, from November 18 through 24 will screen over 20 feature length and short films, many viewed for the first time by Northwest audiences. Among the highlights are Sweet Dreams, introduced by director Šaso Podgorsek and screenwriter Miha Mazzini; Guardians of the Frontier, introduced by director Maja Weiss; and 2001 Academy Award winner No Man's Land. Among the featured readings will be translator Michael Biggins’ selections from Vladimir Bartol'sclassic Alamut, the first-ever English translation of this European classic bestseller. A visual art exhibition, organized by veteran curator Larry Reid, in Northwest Film Forum’s spacious new lobby will include artists from the conceptual collective Neue Slowenische Kunst (NSK), together with their frequent Seattle collaborator, Charles Krafft. A highlight of this ambitious festival will include a performance by Slovenia’s seminal industrial band Laibach, performing on the ninth anniversary of their historic concert at Bosnia’s National Theater in war-torn Sarajevo, which coincided with the announcement of the lasting Dayton Peace Accords. An array of workshops, panels, readings and receptions with notable Slovene and Northwest cultural literati assure an entertaining and enlightening celebration of cutting-edge Eastern European avant garde aesthetics.

Opening reception Friday November 19, following screening of the Slovene film SWEET DREAMS at 7pm
In conjunction with STATE OF ART: THE NEW SLOVENE AVANT
GARDE, a film, lecture and concert series (see p 12), experimental Slovene and American visual art will be featured in STATE IN TIME. Organized by veteran Seattle curator Larry Reid, this exhibition couples the work of members of the experimental art collective Neue Slowenische Kunst (NSK) with their frequent Northwest collaborator, Charles Krafft. Selections from NSK’s recent EAST ART MAP series will be displayed for the first time in the U.S., alongside commemorative works by Krafft inspired by his adventures with the group during the Balkans conflict. EXHIBITING ARTISTS WILL BE PRESENT.

NOV 19 Friday at 7pm
OPENING NIGHT RECEPTION!
Please join us for the opening night reception, featuring a screening of the award-winning feature film SWEET DREAMS with the director and screenwriter in attendance, and the opening for the companion Slovene and American visual art exhibit STATE OF TIME.

NOV 19-24 Fri-Wed at 7pm
No show Monday
SEATTLE THEATRICAL PREMIERE!
DIRECTOR IN ATTENDANCE!
SCREENWRITER IN ATTENDANCE!
SWEET DREAMS
(Saso Podgorsek, Slovenia, 2001, 35mm, 110 min.)
In Yugoslavia of the early 1970s, the American cultural invasion has just begun, and 13-year old Egon is just a little bit behind everyone else, culturally speaking. Finding his path among his family, hippies, schoolmates, teachers, Communists and dissidents, Egon goes off in search of a record player. In Slovene with English subtitles.

Friday only! Plays with NORTH AMERICAN PREMIERE! TANZ MIT LAIBACH (Saso Podgorsek, Slovenia, 2004, BetaSP, 4 min.) Podgoserk's short "rock video" created for Laibach's hypnotic techno hit will be screened for the first time in the Northwest on the eve of the band's performance at Neumos.

Plays with SEATTLE PREMEIRE! THE ORPHAN WITH THE MIRACULOUS VOICE (Miha Mazzini, Slovenia, 2003, 35mm, 12 min.) In this truly demented comedy, a singing orphan beloved by all Slovene mothers reproduces exponentially and must be stopped! In Slovene with English subtitles.

NOV 20-24 Sat-Wed at 9:45pm
No show Monday
SEATTLE THEATRICAL PREMIERE!
SPARE PARTS
(Damjan Kozole, Slovenia, 2003, 35mm, 87 min.)
Set in the ethically unsavory world of immigrant smuggling, SPARE PARTS approaches its subject from the perspective of the smugglers. Young Rudi, recently recruited as a driver, finds that his disgust for his job is matched by a growing love and appreciation for coworker and newfound father figure Ludvik, a former racecar driver turned smuggler. In Slovene with English subtitles.

“One of the most powerful and provocative movies of the year.” —THE GUARDIAN UK
NOV 20 Sat at 7pm
SEATTLE PREMIERE!
TWO SLOVENE DOCUMENTARIES
FILMMAKER IN ATTENDANCE!

ROAD OF FRATERNITY AND UNITY
(Maja Weiss, Slovenia, 1999, BetaSP, 104 min.)
This first-person documentary provides an inside look into the terrifying and bloody events that shook Central Europe in the 1990s, as the filmmaker takes a trip along the road that once united the disparate states of Yugoslavia, from Slovenia to Macedonia. In Slovene with English Subtitles.

GUARDIANS OF THE FRONTIER
(Maja Weiss, Slovenia, 2001, 35mm, 100 min.)
The first female-directed Slovene narrative feature film, GUARDIANS follows three college girls on a canoe trip through the woods. As they travel down the Kolpa River, which separates the relatively affluent Slovenia from a downtrodden Croatia, they find themselves in the midst of a hallucinatory combination of nationalist and personal passions. In Slovene with English subtitles.

Plays with, DIRECTOR IN ATTENDNCE! SEATTLE PREMIERE! ADRIAN (Maja Weiss, Slovenia, 1998, 16 min.) In this poetic fiction, a son’s love and devotion for his mother is spoiled when she is seduced by a handsome Mediterranean man.

NOV 21 Sun at 7pm
PANEL DISCUSSION ON SLOVENE ART!
PREDICTIONS OF FIRE (Michael Benson, 1996, BetaSP, 90 min.)
Toward the end of the period of totalitarian control of the East and Central Europe, a collective movement called NSK appeared, using the materials of music, theater and the visual arts to revisit the repressed traumas of European history and expose the hidden mechanisms of ideological domination. This is a documentary about the NSK movement.

THE NEW SLOVENE AVANT GARDE
Following the screening of PREDICTIONS OF FIRE, NWFF will host an entertaining and enlightening panel discussion on the social and aesthetic implications of new Slovene art within the context of the “New Europe.”Moderated by Robin Held, Chief Curator of the Frye Art Museum, the panel will include such figures as Saso Podgorsek, Charles Krafft, Miha Mazzini, Maja Weiss, Michael Biggins and members of the Slovene art collective NSK.

NOV 21-24 Sun-Wed at 9:15pm
No show Monday
SEATTLE PREMIERE!
DARK ANGELS
(Saso Podgorsek, Slovenia, 1999, 35mm, 96 min.)
This rock ’n’ roll drama is a dark, stylish satire of authority and power that takes place in a small town where rule is split between five childhood friends. They are representatives of all branches of authority: The President. The Head of Police. The Judge. The Priest. The Prophet. Each role is played by members of the Slovene heavy metal band Demolition Group. In Slovene with English subtitles.

DOM SVOBODE (Saso Podgorsek, choreographer Iztok Kovac, Slovenia, 2000, BetaSP, 30 min.) Set in an abandoned factory, DOM SVOBODE (HOUSE OF FREEDOM) is an exhilarating prose poem full of dance and movement that moves from dancers splashing in the mud in the dreary depths of the factory to halfway up a mountain, where adventurous climbers make synchronous leaps into space.

SEATTLE PREMIERE!
VERTIGO BIRD (Saso Podgorsek, choreographer Iztok Kovac, Slovenia, 1996, BetaSP, 30 min.) The mining town of Trbovlje, with its vertiginous mining pits and towering smokestacks, represents a world that modern dance has too often been unwilling, or unable, to deal with. VERTIGO BIRD is an eloquent to bridge that gap by recreating the rhythms of daily life through innovative choreography and haunting visuals.

2004 ACADEMY AWARD-NOMINATED SHORT
(A) TORSION (Stefan Arsenijevic, Slovenia, 2002, 35mm, 14.5 min.)
Setting out on a European tour from the besieged Sarajevo, an amateur choir must leave town via a tunnel—the only connection Sarajevo civilians have with the outside world. If this tunnel could speak, it could tell thousands of stories... this is one of hope. In Slovene with English subtitles.

SEATTLE PREMIERE!
POEM TO MY HOMELAND (Boris Palcic, Slovenia, 1999, 35mm, 17 min.) This is a touching, nearly silent drama of Ljubljana, the capital of Slovenia.

SEATTLE PREMIERE!
HOP, SKIP, AND JUMP (Srdjan Vuletic, Slovenia, 1999, 35mm, 16 min.) Described as “Sarajevo for beginners,” this film demonstrates the relationship between men, women and children at a time of war. In Slovene with English subtitles.

SEATTLE PREMIERE!
YOU’RE FREE. YOU DECIDE. (Miha Mazzini, Slovenia, 2000, 35mm, 15 min.) God gave man free will. The horror of existence starts the moment we must begin to use this divine gift. In Slovene with English subtitles. 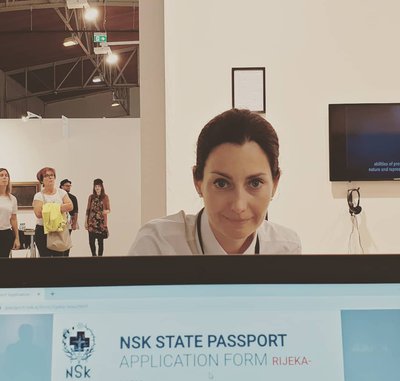 In keeping with the interest of viennacontemporary in ongoing research within the CEE region, this year’s Focus section will not revolve around the invited guest country, but will rather concentrate on the question: What is the experience of a state that is not based on territory, but on time?